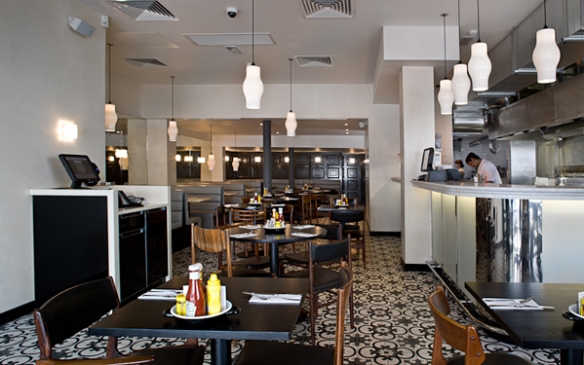 Byron, Old Brompton Road: Ask for a booth when you are being seated

I visited the Old Brompton Road Byron Branch the last day of February 2011 to get my last fix of the Byron “Big D” Burger. It is a special burger that they only have on the menu in February. The burger patty is made from twice ground Scottish chuck steak (the twice ground process apparently makes the fat in the patty finer, thus melting more quickly and evenly within the burger) The meat is from one of my favourite butcher’s in London, Darragh O’Shea in Knightsbridge, which is on a par with Lidgate’s Butcher’s in Holland Park. I have rarely had a piece of beef from either butcher’s which has not been sublime.

I usually go to the King’s road Byron, and I have to say that I prefer the decor and setting in the Old Brompton branch. They are of course similar but one big plus point of the Old Brompton branch is that it has booths, which in my opinion feels more sociable, comfortable and just adds something to any dining experience.

No nonsense, simple Menu. No starters just either Olives or Tortillas, then the main event!

I didn’t have any “while you wait snacks” this time, but the tortilla chips with freshly made guacamole and tomato salsa are always of good quality and taste, and indeed a good thing to nibble on while you wait for the main event!

I of course ordered the “Big D” Burger which is best cooked medium rare. The more you cook it from here, the less juicy and more dry it is going to be. I also recommend adding one of their cheeses to your liking. I usually go for blue cheese or american cheese. Blue cheese has always complimented quality meat, and it actually makes it taste like the meat has been aged for longer. The american cheese is quite mild, but it just works so well with the burger, and there’s just something about the colour and general look of it which makes it look like a classic american burger from the movies.

So, the Big D at £10.50, lives up to its name. It about 30% bigger than the standard Byron burger, and it comes with the usual tomato,lettuce and gherkin on the side. It’s a very tasty burger, the meat is cooked evenly and is incredibly juicy. It is served in a lightly toasted, floury bun which is pleasingly not too heavy. I just had fries on the side, which are passable, not incredibly crispy and not made in-house, but I can understand logistically , freshly cutting the chips in every branch probably isn’t practical for such a big operation and volume of customers.

I did have the Big D which is the Special burger only sold in February, so it’s the one to look forward to next year. But as their standard Burgers go, they are still top quality, a lot of flavour in the patty and maybe just a touch less juicy but it is still a top-notch burger.

One tip to add a bit of extra flavour to your burger or fries, is to get the Yellow Bottled French’s mustard and the tomato ketchup and mix them together to a 50:50 ratio. This will create the equivalent of the Ivy Restaurant Burger sauce and also the standard burger sauce of McDonald’s burgers. Try it with your next burger and let me know what you think! 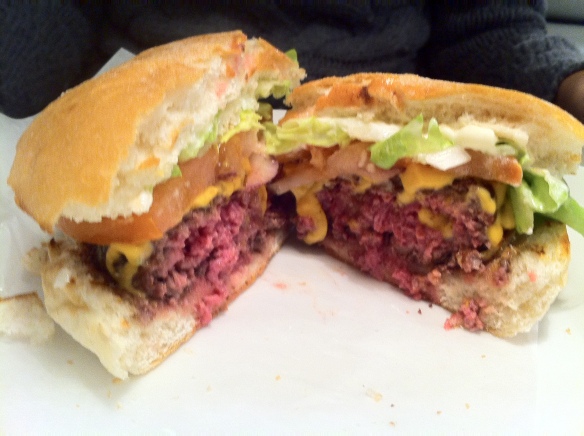 Say Cheese! I recommend either American or Blue

One of the better burger joints in town. I think it has a touch more class than Gourmet Burger Kitchen and it has delivered consistently every time I have been there, regarding the food and friendly, attentive service. The bill came to £39 for 2 people including service, which isn’t that cheap for a few tortillas and a burger. But I do think it is worth it.

And one last thing, if you are going with a lady, near the end of the meal, please order her an Oreo Cookie Milkshake, I have never seen anyone not finish it, even if they say they don’t want it!

Average Price: £20 per person – For tortillas, Burger, fries and a soft drink